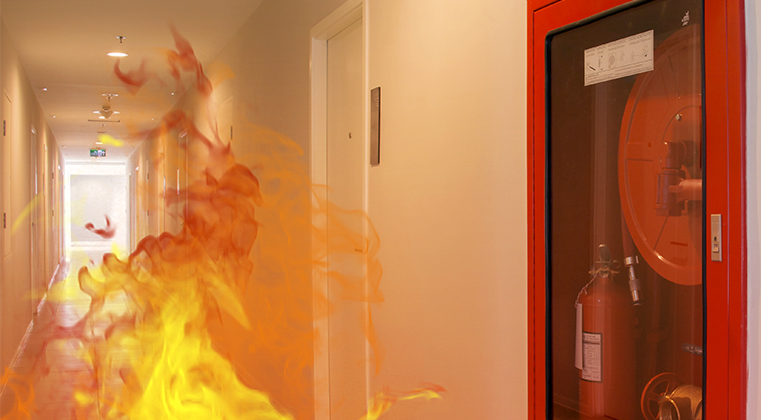 Did you know that a workplace fire can move so quickly, it will be difficult to control in less than 30 seconds?

Think about that big clock ticking down on the TV show Countdown. By the time it hits the bottom, and nobody wins the conundrum round, a small fire in your workplace could have spread so quickly that you need to evacuate. Two minutes after that, the fire could have spread enough to do serious damage, resulting in an average cost to businesses of over £20,000. In just five minutes, someone could fall victim to a fatal level of smoke inhalation.

It’s no wonder, then, that our Fire Warden Training courses focus on the need for clear and decisive action in an emergency. Prevention is always the best form of protection, and to protect effectively, you need to recognise the danger areas where fires start.

Risk of fire in the workplace

These are 5 of the main risk areas for a fire starting in the workplace. We’ve listed them in no particular order because although some of them are more likely than others, it’s important for you to know all of these risks.

We all make mistakes, but some mistakes do more damage than others, and this is never truer than in the case of a fire in the workplace.

A simple accident such as spilling flammable liquid in a workshop is clearly a danger, so usually, the workplace will take extra care over safety. However, even the most innocuous seeming of workplaces can be prone to accidental fire damage.

This is a very common problem. In the modern workplace, there will be multiple potential sources of electrical fires. Something as simple as a badly wired plug or a broken cable can create the ignition needed to start a fire.

Regular PAT testing (there will usually be a little label on older electronics identifying when they were last tested) and some common sense will reduce the danger here. In some cases, such as the example mentioned below in the section on negligence, otherwise perfectly safe equipment can still be a danger.

With an increase in the use of personal devices in the workplace, the danger from faulty electrical items is an ever-growing possibility. One equipment problem every fire fighter will be familiar with is the danger posed by cheap, imported battery chargers and the actual batteries themselves. A badly constructed charger or battery using low-quality components can literally explode.

Accidental fires are probably always going to be possible, but negligence really shouldn’t happen at all. A startling amount of workplace fires are caused by simply not caring about the risk, not recognising negligent behaviour, or not following safe practices.

Whether it is misuse of heavy machinery and chemicals through to simply leaving a toaster unattended or covering electric heaters, negligence should always be challenged and rectified. One of the main reasons for ensuring that all your team are fire safety trained is that training raises awareness of how easy it is to be careless in the workplace, resulting in a fire hazard.

There are a wide range of regularly used materials in almost every workplace that can ignite or even explode. While it is easy to think of the obviously dangerous examples, such as petrol or gas stores, it is really important that we also think about other things that could very easily help to start a fire.

One of the most common hazards is everyday items such as paper and packaging materials. Where items such as flammable liquids are present, your workplace will have (or certainly should have) CoSHH and other safety controls in place. However, there will be no formal controls in place to stop sunlight reflecting through a glass of water and igniting paper on a desk, for example, or a smouldering cigarette from igniting a pile of old cardboard.

Sadly, a large percentage of fires are malicious in nature, either as revenge arson attacks or vandalism. While there is probably little you can do to stop a determined arsonist, never ignore other signs that the workplace is being visited by unwanted guests.

Forced fences, external graffiti, and so on can all indicate that you could be at risk. Similarly, never dismiss threats of attacks by disgruntled employees or even customers.

Recognising and reacting to a potential fire hazard is the basis of an effective policy that will have a real impact on your fire safety. Thinking in terms of general areas like the ones above will help define the potential risks in your specific circumstances.

Scroll To Top
Welcome to the Fire Training Company This site uses cookies. Find out more.